Jeremiah Carter established the Company in Highburton in 1740. Business flourished, and in1850 Jeremiah's great, great grandson, Richard Carter, relocated the Company to Dene Works in Kirkburton, which was to become our home for the next 150 years.

It was at these premises where it became clear our future lay in shovel manufacturing; and in 1870 the Carter Shovel was developed for the rapidly expanding coal mining industry, which was fuelling the Industrial Revolution.

Soon after Richard Carter Ltd was incorporated in 1909, World War I broke out and demand for tools increased dramatically. Every week, thousands of tools were sent via Kirkburton village railway station to the troops on the front line. Indeed, history repeated itself several years later when World War II placed even greater demand on our services.

The 1970s saw the beginning of the decline of the Nationalised Coal and Steel Industries and this forced us to seek new markets. This was so successful that, despite many alterations to the Kirkburton premises during the 1980s, we outgrew Dene Works and began the search for a new home.

Eventually, in 1999 we moved again to Neiley Works in Honley. The new premises gave us the opportunity to embrace state of the art manufacturing techniques which, combined with our heritage, enabled us to innovate our product design and enhance quality.

It has been three centuries since our founder, Jeremiah Carter, had the vision and courage to start his Company. The Carter family, are proud of the fact that we still own and run Richard Carter Ltd. We are prouder still of the people who work here, many of whom have done so for many years, and how far we have come together. Some may see tradition and innovation as unlikely bedfellows, but for us they are what we stand for.

Some may see tradition and innovation as unlikely bedfellows, but for us they are what we stand for

Don't just look for the minimum standard required, look for the Carters Standard - we are the point of reference against which other tools are compared. 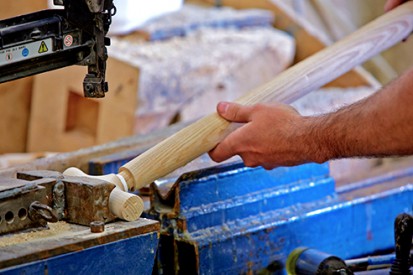 Tools That Stand The Test Of Time

Tools that work as hard as you do

If it doesn't say Shocksafe, is it really shock safe?

Tools that are made to last